General Delegation of the Government of Flanders to the USA

In addition to supporting and facilitating official contacts between the Government of Flanders and the different levels of government in the United States, the General Delegation is also particularly active in the fields of academic, cultural, and public diplomacy, as well as community outreach, the promotion of Flemish policy expertise, and increasing Flanders’ name recognition. Together with Flanders Investment & Trade and VISITFLANDERS, the General Delegation of the Government of Flanders is your source of information on Flemish diplomatic, academic, scientific, cultural, economic, and touristic activities and exchanges in the United States.

Since 2009, the General Delegation of the Government of Flanders to the USA is located at Flanders House on the 38th floor of The New York Times Building in Manhattan.

We can easily be reached by public transport: our offices are located right across from Port Authority (buses from New York & New Jersey) and we are also accessible via subway station Port Authority - 42nd Street - Times Square (lines N, R, Q, W, A, C, E, 1, 2, 3, 7, S).

The Atlanta office of Flanders Investment & Trade covers 7 states in the Southeast:  Alabama, Florida, Georgia, Mississippi, North Carolina, Tennessee and South Carolina. Questions about the unincorporated territory of Puerto Rico and The Bahamas can also be addressed to our office.

Our office is based in Georgia, home to a multitude of Flemish investors. If you as a Flemish company are considering to join them, please let us know so we can help you and connect you to the right people.

Our office’s focus lies on textile, agribusiness, environment and veterinary products. For these sectors in particular, we cover the whole of the US.

If you’re an American company in the Southeast that is looking to expand in Europe, please let us convince you of the many assets of our region.

Connecting the dots between Flanders and the US, is what we’re here for!

The Houston office of Flanders Investment & Trade covers the states of Texas, Colorado, Louisiana, Arkansas, New Mexico, and Oklahoma. Much of our focus is on the Lone Star state as Texas is the largest exporting state to Belgium in all of the U.S. That being said we keep our fingers on the pulse of every economy which falls under our jurisdiction.

Positioned in the energy capital of the United States, our office possesses expertise and extensive contacts in the energy, chemicals, industrial, and transportation sectors. However, we also dedicate a lot of time interacting with companies in the fields of life sciences, tech, manufacturing, and even space!

Everyday we strive to strengthen the trade and investment relationship between Flanders and the United States. If you’re a Flemish company looking to break into the American market, please reach out to us. We are eager to assist you in finding the necessary resources and contacts in order to make your expansion a success! Come and see us, if you’re an American firm that is looking to expand into Europe. We offer confidential advice tailored to meet your expansion needs and are excited to show you all of the world class opportunities that are found in Flanders! Contact us today and discover why Flanders is the gateway to Europe.

Our office of Flanders Investment & Trade in Los Angeles covers 11 western states of the USA, from California up north to Washington, from Wyoming down south to Arizona, and with two outliers, Hawaii and Alaska. The biggest chunk, of course, is California, by itself the fifth largest economy in the world, thanks to a thriving technology cluster in the Bay Area and an even bigger multi-industry heavyweight south.

With an office that looks out on the Hollywood sign, it will come as no surprise that media and entertainment are two of the sectors we focus on. Jewellery and diamonds are two more. And we’re very much into design and interior decoration as well. We’ll be just as happy to help if you’re in apparel or aeronautics, in chemicals or chocolates, in water or waste, if your questions concern our jurisdiction. Otherwise, there are colleagues with tons of expertise in those and so many other sectors in our other offices.

VISITFLANDERS North America is the Tourist Office for Flanders-Belgium and covers the USA and Canada. VISITFLANDERS works very closely with travel agents, tour operators, associations, and the North American press and general media to promote this region that is constantly improving its line of products and attractions as a destination for cultural travelers and a meeting and conference destination.

Traveling leads to broadening a person’s worldview, increasing self-confidence, and a better awareness of people and places. And as an organization, VISITFLANDERS actively works on the future of tourism, the Travel to Tomorrow, rooted in local communities, local entrepreneurs, in neighborhoods, villages and cities that thrive and, as a result, enjoy welcoming visitors that are passionate about what Flanders has to offer. A flourishing community is very much connected to its specific place; where people work together, where visitors can feel at home and residents can nurture and share their love for the place.

Flanders is highly connected to the world. It is a core task of the foreign policy of Flanders to defend Flemish interests abroad. 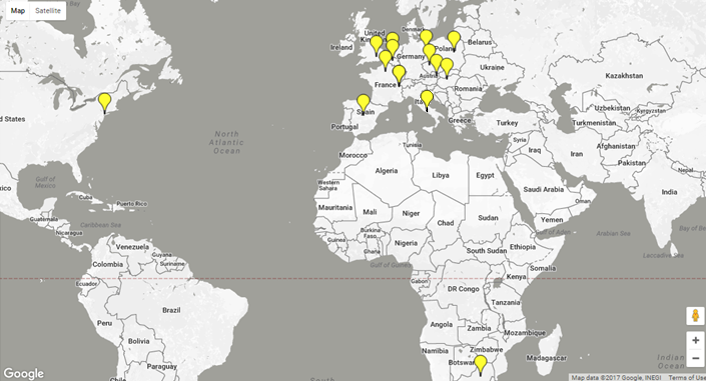 The transatlantic relationship with the United States of America, together with European integration and a preference for multilateral cooperation, is one of the cornerstones of Belgium’s foreign policy. The United States is a strategic partner in defense and security and our most important trade partner outside the European Union. In addition, both countries cooperate constructively in various multilateral and regional organizations.

The Belgian Embassy is situated in Washington, D.C. and there are three Consulates General in the United States, located in New York, Atlanta and Los Angeles as well as many Honorary Consulates throughout the country. To date almost 28,000 Belgians with permanent or temporary residence in the USA are registered with the consular services. Most Belgians live in the states of California, New York, Georgia, Texas, and New Jersey. Click here for more information.